Cambridge, 27th July 2010; The Royal Air Force is to use battery charging facilities supplied by Marshall SV, part of Cambridge based Marshall Land Systems, following the award of a contract by the UK MoD’s Deployable Test and Support Equipment (DS&TE) project team. 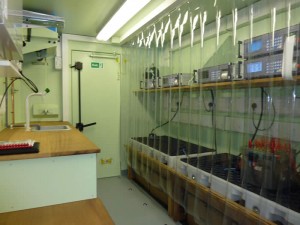 Six systems consisting of eight chargers and one discharger/analyser unit housed in a transportable shelter are being supplied, the first of which is being used for operator familiarisation training before the systems are deployed. The programme is being delivered six weeks ahead of schedule and includes the state of the art EFA 2000 Battery Charging systems.

“The development work to produce these battery charging units really demonstrates the benefits of provider and end user working together as a team. The combination of the Subject Matter Experts in the General Engineering Flight at RAF Coningsby, Air Command, the DE&S branch that look after all electrical GSE throughout the MOD and our project team has lead to an advanced, fit for purpose solution that is affordable and delivered early,” said Peter Callaghan, Chief Executive of Marshall Land Systems.

An example of the team work on this project was the validation of the Battery Chargers themselves, where Marshall SV organised a risk reduction exercise at the Battery Charger supplier’s premises with the Subject Matter Experts, including the Typhoon delivery team. This considerably reduced the lead time and provided an enhanced solution for the end user.

“Working together as has happened on this contract has real benefits for the MoD not only do we get a solution which matches our needs first time but we also save money as we only need to go through the development process once,” said Gary Daniels, Head of Deployable Mechanical Repair Systems (DMRS), DS&TE.

The state of the art EFA 2000 Battery Charging systems have been designed to maintain all in-service aircraft and ground use batteries, such as 12v lead acid batteries for vehicle and ground support equipment and both lead acid and alkaline 24v aircraft batteries (including Typhoon). The EFA 2000 are used to maintain the European Fighter Aircraft / Typhoon battery and is in service with the Austrian, Italian and Royal Saudi Arabian Air Forces, this contract will now see the charger being used by the RAF as it completely meets their charging requirements.

To meet the latest safety and environmental compliance requirements the shelter units are fitted with full separation of all acid and alkaline systems, and include safety features such as an external drench shower for use in an emergency should an operator become contaminated with either acid or alkaline. The system is fully air conditioned to maintain the internal environment with independent extraction systems for each charging area to ensure all fumes are vented safely to the outside atmosphere.