The Ministry of Defence has placed a contract with Force Protection Europe Ltd for the purchase of two Ocelot light protected patrol vehicles. The acquisition has been made to enable further testing in respect of the MoD’s Light Protected Patrol Vehicle programme. 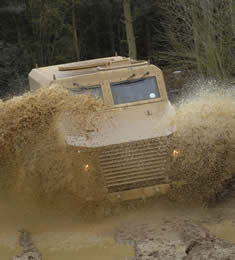 David Hind, Managing Director of Force Protection Europe, said: “We are very pleased with how our own testing and development schedule has been progressing. Ocelot has been performing well in tests since the middle of last year and has demonstrated that it offers unprecedented levels of survivability and manoeuvrability for a vehicle of this size and weight.”

Graeme Rumbol, Global Vehicle Product Group Director for Ricardo plc, added: “The MoD has already completed a number of their own tests on two of our vehicles so we’re delighted that they are now investing in these vehicles so that they can carry out further trials. Ocelot is building upon our existing long-standing relationship with the UK MoD which has most recently seen Ricardo carrying out extensive fleet upgrades to create the new RWMIK Plus standard of WMIK vehicle.”

Ocelot has the flexibility to perform a range of roles including patrol, fire support and protected logistics. Innovative features include role-specific pods which can be fitted quickly to the core automotive armoured V-shaped hull in the field. The armoured hull houses the main fuel tank, drive line, batteries and generator as well as the powerpack, which includes the engine, gearbox, auxiliary fuel tank and associated ECUs (electronic control units). The vehicle has been designed from the outset to be easily repaired and maintainable in the austere environment of a forward operating base. Commercial off the shelf (COTS) components have been used to ensure maximum availability of spares worldwide.

Ocelot is equally suited to operations in desert, jungle, mountainous or urban environments and meets the needs of military and internal security forces around the world.

The excellence of Force Protection’s survivability technologies are amply demonstrated by the performance of the company’s Mastiff and Ridgback Mine Resistant Ambush Protected (MRAP) vehicles. The Cougar vehicles upon which they are based are recognised around the world as offering the highest levels of survivability. Ricardo is a leading independent technology provider and strategic consultant to the world’s transportation and clean energy sectors. Its highly successful defence vehicle engineering operations in both the UK and north America are based upon the company’s thorough understanding of vehicle operational requirements and access to the very latest in automotive technology.