Final fuelling of the satellites carried by the Ariane 5 rocket will be completed using chemicals delivered in tanks manufactured by GOFA Gocher Fahrzeugbau GmbH (www.gofa.de), a Chart Industries, Inc. company. 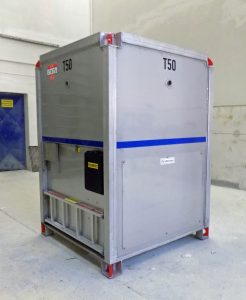 The tanks consist of two parts containing the chemicals, which, when mixed together, provide the energy to send the satellites on their mission once in space.

The tanks have been designed to fully meet all US and European transport regulations for hazardous liquids and gases.  This means that the tanks can be used at Cape Canaveral in the US, the Guyana Space Centre at Kourou in French Guyana, in Japan at the Tanegashima Space Centre and in Baikonur Cosmodrome in southern Kazakhstan.

The fully insulated units are housed in a frame which is built to protect the tanks whilst they are being transported and to make it easier for Ariane Group to move them to the required location.

Though the tanks have been primarily designed for use in the US with the Ariane 5 they can also be used on the Falcon Heavy Rocket of Space X.

The Ariane Group contract, awarded in 2017, is a success for the company’s newly established Government Sales Team, specifically established to provide GOFA’s core competencies to government organisations and adjacent markets through the development of storage and transport solutions to deliver water, fuel and gases wherever required.

“The contract capitalises on the group’s experience where understanding the complex regulations is a pre-requisite of success and it was this which was a major part of winning the contract,” said Alexander Schramm, Managing Director of GOFA.

Headed by Jan Gerhard-de Vries, the Government Sales team has offices in the US, Canada, UK and Ireland, Germany, Eastern Europe, Russia and the UAE.